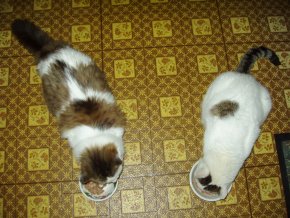 Dry cat food is the very worst thing anyone can feed a cat – no matter how natural it is said to be. Studies show that kitty kibble causes a mild dehydration of the pet which damages the kidneys and can predispose to urinary crystals. The starch required to make dry food is also unhealthy for cats since they are carnivores.

In my view, the best food for cats is a balanced raw diet. Unfortunately, cats tend to be very finicky about their foods. In fact, cats become imprinted on the food they are first fed. They can even become addicted to the shape of the kibble. That’s why each pet food company makes their kitty kibble in distinct shapes.

The companies also spray the surface of the kibble with “animal digest” which is similar to MSG and has a taste cats can’t resist. I liken this to Doritos. I personally do not care much for plain old corn chips. However, when those same chips are sprayed with that Doritos coating, I can’t resist. Similarly, the cat’s natural proclivity to eat a healthy diet is hijacked by the technology of flavor enhancers.

I have personal experience with switching finicky felines to raw. Several years ago I inherited my parents’ cats and these kitties were dry food junkies. When I put raw food in front of them they looked up at me and said, “We can’t eat this. Are you trying to kill us?” Well, my other cats were all eating raw food so I told the newcomers, “You’re going to have to eat this food like everyone else.” Day and night I put a bowl of raw food in front of them, and each time they turned their noses up.

By day three of their hunger strike I think I heard them say, “We’d rather die than eat that raw food.” By the way, although a healthy cat can miss a meal or two, a cat that does not eat for three days can go into liver failure and die, so I do not recommend the starvation method of food transition. Because of this learning experience, taught by a couple of pros, I have come up with the following finicky cat transition technique.

The first step is to get him on a twice-a-day feeding schedule. No matter what your cat may tell you, he does not need a bowl full of food sitting out all day. If he were in the wild, he would not have dead mice lying around to eat. In fact, he would have to get his butt off the couch and catch a mouse. And, if he missed that mouse, he would go without a meal.

So first thing in the morning, you put ½ of your cat’s daily ration in the bowl and put it down for him to eat. If your cat is like most, he is likely to eat a few pieces and walk away, confident it will be there later. But, it will not be there later. Let the bowl of food stay down for 15-20 minutes and then put it up and away.

Then, in the evening when you put a bowl with the other ½ of the daily ration down, your cat is very likely to finish it off. He will quickly (within a few days) get into the new rhythm of eating. (If you have more than one cat, feed them separately and in different rooms if necessary). 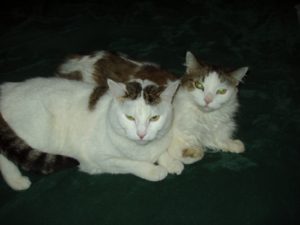 It may be best to start the feeding schedule during the week when people are not in the house to hear the cat complain about the lack of readily available vittles. And, if you are home for the transition and your cat does complain, do not give in. Giving him food when he gets loud and obnoxious will only reinforce the unwanted behavior. You must resist the temptation to give in to your cat’s demands.

Now that your cat is used to eating morning and night, it’s time to start adding the raw food. With each feeding, put a teaspoon of raw food on the bottom of the food bowl and put the dry food of top. That way, your kitty won’t have to touch the raw food but he’ll smell it with every bite of dry food he takes. Considering the sensitivity of the feline nose, this is a big step.

Once your cat adjusts to the new aroma, mix the raw food in with a small amount of the dry on the bottom of the bowl. That way, if he wants to get a whole belly full of food, he’ll have to eat some that is touching the raw food. Now, very gradually mix in more and more of the raw and less and less of the dry. After a month or so of this process, you should have a totally raw-fed cat. An additional step to this process that some cats benefit from is to first make the gradual switch from dry to canned cat food and then gradually switch from canned to raw.
For many cats, the owner has to really want to see their companion eating a healthy, raw diet. It takes persistence and a slightly deaf ear, but it can be done. If I can make raw eaters out of my parents’ cats, I know you can do the same for your kitty.