Is Dominance Necessary to Train Your Dog 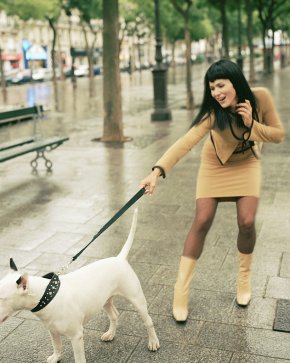 For years dominance was believed to be the cause and solution for behavior problems in dogs.

Given the popularity of the program Dog Whisperer, I think the issue of “dominance” should be addressed. Most of us who have championed positive methods of dog training are up in arms about Cesar Milan’s fame and continued use of the term “dominance” and its justification for physical corrections in dog training. Cesar Milan gets some things right: dogs need exercise and stimulation, and dogs should be treated like dogs. Dog trainers are thrilled that someone has gone public with the idea that dog behavior can be modified. But where positive trainers diverge from Cesar is on the dog’s motivation for its behavior, i.e., is it truly dominance that is motivating the dog or is there some other motivating factor?

For years dominance was believed to be the cause and solution for behavior problems in dogs. The belief that behaviors such as peeing in the house and pulling on leash and not coming when called were caused by the dog thinking he was dominant over his humans originated from studies of captive wolf packs in the 1940s and was popularized by the Monks of New Skete in 1978. Cesar Milan has furthered these beliefs.

The Monks of New Skete used the wolf pack as their model for dog training. To them, dogs live in packs with humans.  Therefore, humans have to emulate pack behavior and assume the alpha position within the pack. Dominance to them was seen as a psychological disorder in dogs. Methods such as alpha rolls and physical corrections, were often recommended as a way for humans to establish dominance over their dogs. Cesar Milan continues to offer the alpha roll and physical corrections as the proper way to assert dominance and correct behavior.

Advocates of dominance theory often compare dogs to wolves. But what scientists have realized is that dogs are not wolves and the early studies of captive wolves were seriously flawed. The behavior of captive wolves who were members of  differing wolf packs is vastly different than the behavior of wolves in the wild whose packs are typically made up of a family, the breeding animals and their offspring.

In observations of village dogs throughout the world, it was revealed that while dogs are social animals and have ritualized displays of dominance and submission that are used to prevent conflict, it is primarily rituals of submission that keep peace, not displays of dominance. Plus, these village dogs are more scavengers than predators and live much more solitary lives than wolves. Dogs in the wild rarely form packs, and when they do, they are loosely structured and have few of the traits seen in wolf packs. Dr. Ian Dunbar once said, “Saying, ‘I want to interact with my dog better, so I’ll learn from the wolves’ makes about as much sense as saying, “I want to improve my parenting so let’s see how the chimps do it.’ ”

But, most importantly, applying the data of captive wolves to dog-human interactions was hugely flawed. Humans are not dogs. We do not have the timing that dogs have nor do we always accurately interpret dog behavior well enough to act like a dog.

Most importantly, those who work with wolves and wolf-dogs have learned that these animals do not tolerate aversive handling from humans. There are non-adversarial ways to set rules and boundaries for your dog that don’t involve force or intimidation.

Dogs’ social hierarchy is not a fixed linear dominance hierarchy in which the dominant dog maintains order by threatening and intimidating underlings. Experts now agree that wolves and dogs form an appeasement hierarchy in which subordinate animals maintain order through active displays of submission and deference rather than displays by dominant dogs of forcing others into submission. Jean Donaldson offers the Army as a human analogy. Lower ranking soldiers salute their superiors with a flourish and then get a cursory salute in return. The general does not enter the room and start throwing his weight around: he simply appears and everyone starts saluting.

The vast majority of high status dogs lead benevolently. They do not use physical domination to make their points. They lead through subtle psychological control, such as confident posture, withering glances, staring, stalking, barking or growling.

The mark of a true leader is the ability to control without force. The true leader is in control of the resources. Leaders initiate, followers react. What you need to understand is that status is flexible – it changes depending upon the dog’s motivation, the context, and the situation at the moment.

Another problem with dominance theory is the term itself. It is not a precise unambiguous definition. What does dominance mean, truly? As Patricia McConnell says, social hierarchies are complicated things that allow animals to live together and resolve conflicts without having to use force every time a conflict comes up. McConnell is of the opinion that social status is relevant when dogs greet one another, when there is potential conflict over who gets the bone or who goes out first

To McConnell, studies on many different social species have made it abundantly clear that relationships between individuals are based as much on individual personality and learning as they are on social status. Thus, quoting McConnell, “using dominance as a foundation of a training program ignores all that ethologists have discovered about the nuances of communication and social interaction, and all that psychologists have come to understand about the learning process.”

Many dogs previously considered to be dominant are simply unruly and have not been taught basic skills or given structure and consistent rules. They have learned that annoying, attention-getting behaviors get them what they want.

So, what is a leader, then? It means establishing yourself as someone your dog willingly defers to, looks to for guidance, trusts and follows. Leadership does not take force, violence or aggression. True leaders are quiet, confident, benevolent, fair and consistent. They rarely have to establish their position. Their entire attitude communicates leadership and everyone knows it. There is no need for physical corrections or to use dominance as an excuse to get physical with our dogs. Recognize that most misbehavior on the part of dogs is due to the fact that their (mis)behavior has been rewarded somehow and they are repeating it. It is a rare dog who uses behavior as a method of gaining the upper hand over their human.

For more reading on this fascinating subject, I have listed some good books. While I would like to take credit for what I wrote in this article, nothing was a new idea. It was all borrowed from these books:

Lilian Akin, CPDT-KA, CBCC-KA is a local trainer/behavior counselor.  She got her start training dogs at Animal Friends.  She has also taught classes through the Western Pa. Humane Society and currently volunteers at the Animal Rescue League.  Her practice focuses on assisting pet dogs and their owners.  She uses positive reinforcement and scientifically based training techniques.  She is available through her email at laakin@verizon.net or her website at www.akinfdt.net.