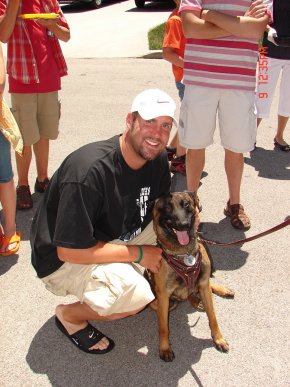 Since 2007 the Ben Roethlisberger Foundation (BRF) has provided police and fire departments in Pittsburgh and in the cities and surrounding areas of each regular season away game during the Steelers season with a very special contribution: grants for canine units in each of those cities. The majority of the grants help K-9 units to purchase dogs and dog safety vests, but other types of K-9 related needs are also included.
Since its inception the BRF has made 135 grants totaling more than $1.2 million to 129 police and fire departments and five community youth organizations, including Ronald McDonald House Charities and Make-A-Wish®. The 129 canine grants have funded the purchase of more than 67 dogs, the training of more than 29 dogs and 50 handlers, safety equipment, such as vests, for more than 54 dogs and training equipment for more than 33 dogs as well as food, vet services and housing for many more.
During the 2013-14 grant cycle, the BRF distributed $157,600 in grants to K-9 units around the country, including $87,000 to police and fire department K-9 units in the Pittsburgh community. Remembering Rocco, the K-9 officer killed in the line of duty in January, Officer Phil Lerza began training this spring with Beny, a 13-month-old German Shepherd/Belgian Malinois that the Ben Roethlisberger Foundation bought for him.
“My Dad instilled in me a love and respect for animals. This is a good way to combine that passion with a desire to support the police and fire departments, which deserve all the appropriate resources needed to protect our cities and neighborhoods, and allow these brave men and women to arrive home safely,” says founder and Pittsburgh Steelers quarterback Ben Roethlisberger on his website.
In October 2013 Roethlisberger became the first non-law enforcement individual to be honored by the Amen Corner when he was honored at the 13th Annual Amen Corner Senator John Heinz Law Enforcement Awards Luncheon, receiving the award for his contribution to K-9 units through his foundation. 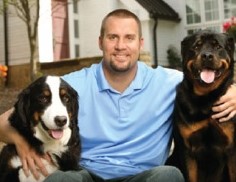 Roethlisberger has been pictured many times with his two dogs, Rottweiler Zeus and Bernese Mountain Dog Hercules. In September 2013 his fans mourned with him as he said an unexpected goodbye to his buddy Zeus. “Zeus was with me for 9 years and was my first dog. He was my man and had been there through Super Bowls, tough losses, injuries, snow storms and the heat. He was the best and I feel blessed to have had him in my/our lives for so long. I know he’s in heaven waiting to play tag or just cuddle again soon,” he said on his Facebook page that day.
The BRF also works with the Make-A-Wish Foundation and after last year’s fundraiser donated $30,000 to Make-A-Wish®. For the past several years Ben has devoted time to the Make-A-Wish Foundation because of his passion to help children. One of the most memorable of these Make-A-Wish moments was when he met 14-year old Akeem Havens, who signed a contract with the Pittsburgh Steelers in May 2008 to become one of Roethlisberger’s go-to wide receivers for the day.
“I have been blessed with opportunities throughout my life to pursue my goals and achieve some success, all under the guidance of a loving family and supportive communities,” Roethlisberger said about establishing a charitable foundation. “I was raised to appreciate my blessings and always try to help others who may not be as fortunate. I feel honored to be able to do so.”