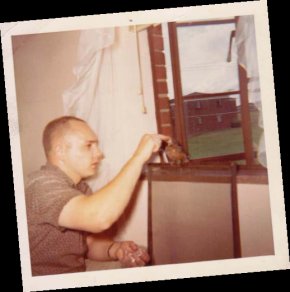 One summer day many years ago, while headed out to shop, my wife and I noticed a rustling on the ground beneath a small tree.

Upon investigation, we found a tattered nest beside two nestling birds in the grass. These guys were featherless newborns. Without intervention, these little ones wouldn’t have a chance with the occasional feral cat around. What to do! Well, of course we took them in. We placed a small towel in a cardboard box and began an incessant routine of raising what turned out to be baby robins. This was no small task. With no experience in raising birds, so began our “bird summer.”

We began their feeding with little bits of bread dipped in water. We worked in shifts, feeding every half hour or so. I got creative and started dipping the bread in milk. Later, visualizing parent robins feeding their young regurgitated worms, we tried ground beef and met with resounding success. The pair grew at a quick rate, sprouting pin feathers and growing quickly. In a few weeks they were fully plumed and very active. Since they were adopted at such a young age, they imprinted on us and never showed any fear. We were able to hold them in our cupped hands, later graduating to having them perch on our fingers. The birds looked to us like they were approaching fledgling stage, so we took them outside in their box and introduced them to the world. I actually taught them to fly by holding them a few inches off the ground and gently “booting” them off my finger, allowing them to flutter safely to the grass. After several outings, one managed to fly away to a tree and wouldn’t return. However, the other stuck around and we enjoyed his company all summer.

After spending more time outside with our remaining bird, he began to flutter farther away, but always to return to my shoulder. We kept feeding him (I think the bird was a male) and he hung around with us until we attempted to leave him to his own devices. He remained in the yard to be fed and eventually discovered that he could access meals by flying up to a window sill. If we opened the window he would hop in. It was during these visits that we heard him vocalize his first calls. These sounded rather odd – not like robin, so we named him “Squeaks.” I suppose I had been a lousy role model in the speech department.

Throughout the rest of the summer and into the fall, Squeaks was our daily visitor. He always flew up to the bedroom upon hearing the alarm clock before I readied for work and greeted me by flying down to my shoulder when I got out of the car in the afternoon. Our neighbors initially did a  double-take in seeing our interaction, but became accustomed to it. An approaching thunderstorm would prompt Squeaks to return to a windowsill and he could always count on a dry towel-nest and a handout ‘til things blew over. One day

I looked out and saw him perched on a telephone wire, flanked shoulder-to-shoulder by two sparrows. Weird! Had he been “readopted?”

Squeaks flew away in late fall and we thought we had completed our bird-parenting. Lo and behold, Squeaks returned one time in the spring, to light on a porch railing inches from me, reach over and swipe his beak across my shoulder. It was almost as if he was saying: “Hi dad, I’m back and everything’s O.K.” We never saw him again but to this day I feel kin to all robins.